Total donated: $
Enter Gallery
This show took place in January 2012.
You can access all of our past shows by becoming an AMP Round 1 Member

The Aesthetics of Low-Res

10,000 Pixels is about the creative strategies that emerge from limitations. For this exhibition, artists were given an “allowance” of 10,000 pixels and asked to create three images using only those pixels. The results range from tiny geometric forms, hotdogs/shit, tiny animations, and reminiscences of NES graphics and the early web.

We experience digital images in a kind of bracketed time. Current technologies look clean and crisp, whereas images from a few years ago seem inadequate and embarrassing. When looking at a video I made only a few years ago, I noticed the huge differences in quality between the older piece and more recent projects made in HD. Yet as a two-dimensional surface, even a seemingly low-resolution image contains a gigantic amount of information. A crummy YouTube video might have had 320x240 pixels, but even such an unacceptably low-resolution image contains 76,800 pixels [1]. The works in this exhibition explore the limitation of resolutions that are several orders of magnitude lower, having more to do with historical influences than the promise of 4k projectors.

In 1974, low-resolution computer graphics were born. In that year two arcade games were released: Taito’s Basketball and Midway Games’ Gunfight [2]. Both games are cited as the first use of sprites, or small graphical elements that can be moved independently, representing things like characters, items, or enemies. An exercise in limitations, Gunfight’s tiny cowboys are made from 21x33-pixel blocks; the bullets are single squares diagonally crisscrossing the screen. 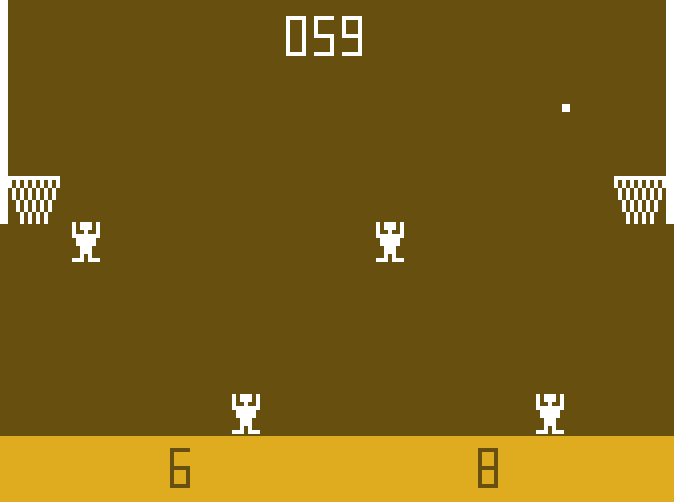 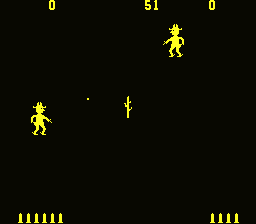 The Atari 2600 was released in 1977 and is certainly a visual predecessor/inspiration for much of the work here. The extreme hardware restrictions of the 2600, which are meticulously detailed in Ian Bogost and Nick Monfort’s book “Racing the Beam” [3], brought resolutions down to as low as 256x192 pixels. This forced game designers and programmers (who were often one in the same) to be even more inventive when it came to graphics. Games like “Pitfall!” and “Adventure” proved that a lot could be done with a little. The danger with such limitations is best exemplified by Atari’s complete failure “E.T.”, with such indecipherable graphics and terrible gameplay that Atari is rumored to have buried thousands of “E.T.” cartridges in the New Mexico desert.

For vintage technology, limitations might either have been due to technological or financial reasons. The Atari 2600’s resolution, while the result of technical limitations, can be traced very clearly to business concerns. Much better graphical technology existed at the time, but Atari chose instead to use chips of lesser quality, making their game systems cheaper to produce in an effort to gain the upper hand on the booming home-console market.

Today we are faced with megapixels (millions) and gigapixels (billions) of data. The result is an aesthetic of high-res: “Avatar” and HDR photography offer a hyper-real world that presents far more information than our everyday experience affords [4]. Yet many artists openly embrace the low resolution of antiquated technology. In considering the question of why someone would be interested in making low-resolution images today, examples from video games kept coming immediately to mind (Super Mario Brothers, the Atari and Intellivision games listed above) while ones from early computer systems, photography, and other media did not.

I think this was in part because for myself and the generation before me, our first experiences with pixels were in games, either in the arcade, on home consoles, or on computers. I was fortunate enough to grow up in the suburbs of Minneapolis around the time that the Minnesota Educational Computing Consortium (MECC) was developing Oregon Trail and Number Munchers nearby. Our elementary school had a room of Apple IIGS computers, and pixel-y oxen and dysentery were one of the best memories of my childhood. 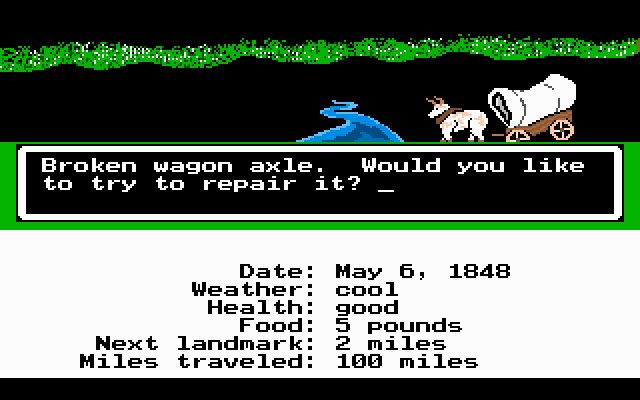 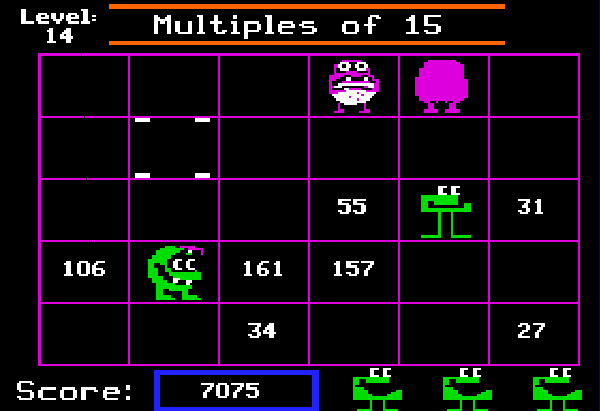 The asceticism and attention to detail in these historical examples and in the works of this exhibition, can be seen to permeate much of new media, though often offset with camp, irony, and layers of inside jokes or psychedelia. It is perhaps the artistic pixel-level lineage outlined above, combined with the circular flow and remix of web-based media that leads to a fascination with such images today. Unlike the increasing-manipulated hyper-realities, low-resolution images bump against pixel overstuffing, while also addressing techno-nostalgia, hard-edged abstraction, the essentialism and seriality of Minimalism, and the pop culture remixing of Warhol and Postmodernism.

[1] A further expansion of the pixels in a low-resolution webcam unveils an astonishing amount of information stored in a single frame: 76,800 pixels x 3 values per pixel (one for red, green, and blue values) = 230,400 x 8 bits (and this is low-quality color) = 1,843,200 bits per image. At 30 frames per second, this means almost 60 millions values are flying through the computer for each second of video.

[4] It is worth noting that current technologies, while mostly offering such resolution as to allow us to suspend our disbelief, these can also fail epically. Poorly blown-up subway posters and too-low-resolution images printed from the Internet belie the pixilation and compression that is within all images.

JEFF THOMPSON received his BFA from the Minneapolis College of Art and Design and his MFA from Rutgers University. He is currently Assistant Professor of New Genres and Digital Arts at the University of Nebraska, Lincoln.

Thompson has exhibited and performed his work internationally, most recently at SITE Santa Fe, Jersey City Museum, Weisman Art Museum, Hunter College, White Box Gallery, and Museo Arte Contemporaneo in Argentina. Thompson was awarded the Van Lier Fellowship from Harvestworks in 2008 and a commission from Dispatx, an alternative curatorial platform based in Spain and NYC, in 2007. In addition to his studio work, Thompson co-founded the Texas Firehouse, an alternative gallery space in New York City from 2007-2009 and is currently a co-founder of Drift Station Gallery in Lincoln, Nebraska, USA.